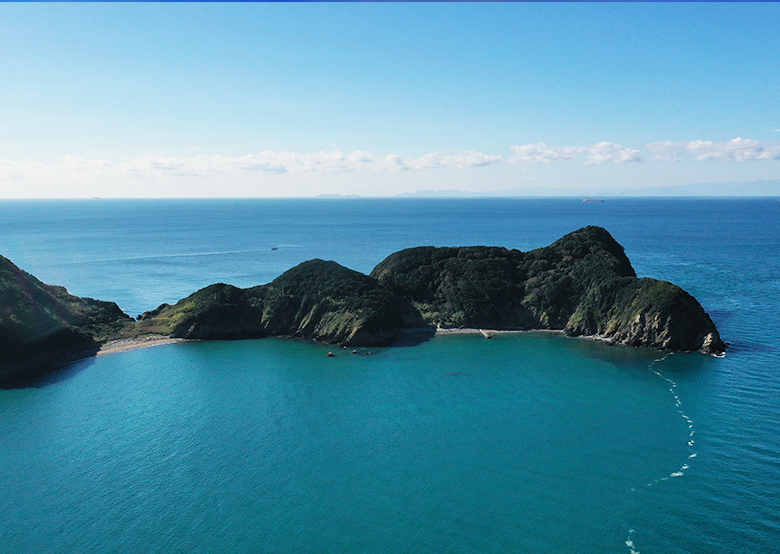 There is a beach on this uninhabited island in the Kii Channel. The length of the beach is about 500 meters. From the Hatsushima fishing port, take a ferry to the island (approximately 7 minutes one way). The water quality is good and the transparency is high, so you can swim with small fish! You can enjoy barbequing and camping, which is rare at the beach !!!

Arida City is famous nationwide as the production center of the brand "Arida mikan oranges". As Sawako Ariyoshi wrote in her novel "Aridagawa", "It is stunning, you can easily mistakenly think that all the mountains are sprayed with gold." the orange mountains surrounding the Arida River dividing the city into two, are dyed in an orange hue from October to December.

Menoura Coast to Miyazaki No Hana

Miyazaki No Hana is located on the south side of the mouth of the Arida River. The Kii Channel spreads out in front of you from here, and on sunny days you can see far away, all the way to Shikoku (Tokushima Prefecture) and Awaji Island. The coastline leading to Shirasaki boasts wonderful coastal beauty, and the area has been designated as the Nishi-Arida Prefectural Natural Park. This place is also famous for its colonies of Harebell and Yuusuge (a kind of daylily). In March 2011, the promenade of Yabitsu – Funakoshi – Menoura was constructed.

Located in the southwestern part of Arida City, the "Yabitsu district" is a hill town facing the sea. In July 2017, one vacant house in this area was renovated, and "Arida City Emigration Exchange Base Facility - Kurashicharu Yabitsu" was born, where you can stay as trial living. If you are interested in living in the countryside or want to experience living by the sea, you are welcome to make use of this.

Since this hot spring has a pH of 8.7 and naturally contains sodium bicarbonate (baking soda), your skin will feel good while taking a bath and it will give your skin a smooth feeling.

Mikan oranges have been cultivated in the Arida region for a long time. We recommend you to enjoy mikan orange picking at "Producer Farm Sugai Nouen" managed by mikan orange producers in Sugai district, Miyahara-cho in Arida City, this area is said to be well suited to mikan orange cultivation.

Currently, the remaining historical record of the Inari Shrine is "Itogasha Yuisho", which was reported to the shrine association by Suo Hayashi, the Shinto priest of the shrine during the 7th year of the Emperor Bunka (1810). In this record, the founding of Itoga Shrine took place in "in the spring of the 3rd year of the 37th Emperor Kotoku, Hakuchi, the shrine was moved to Maminami-no-mori and called Itogasha". The 3rd year of the Emperor Hakuchi is about 60 years before the founding of Fushimi Inari Shrine during the reign of the Emperor Wado. For this reason, Itoga Inari Shrine was the first Inari shrine to be built in the country, and the words "First Inari Shrine in the Country" is written in the frame on the Torii gate in front of the shrine. The gods enshrined there are Ukanomitama-no-kami and Otsuchi-no-mioya Ohime-kami, and the Kii Zoku Fudoki (records of regional climate and culture) says, "They are the local gods of Shoucyu-Sanka village, and in times past, the shrine was spacious and beautiful, also there were many rice fields cultivated for shrine expenses”. This Sanka village was located in the current Itoga district and Suga district. Three big camphor trees 500 to 600 years old are standing in the shrine and remind us of the history of this place. (Designated cultural property of the city)

This is a museum set up next to Itoga Inari Shrine as a resting place for those who pass through the Kumano Kodo. Materials related to the Kumano Kodo, such as the diary of the Fujiwara no Teika, are on display.

This is a museum on the 4th floor of the Arida City Cultural Welfare Center, collected and displayed here are materials related to Arida mikan oranges.